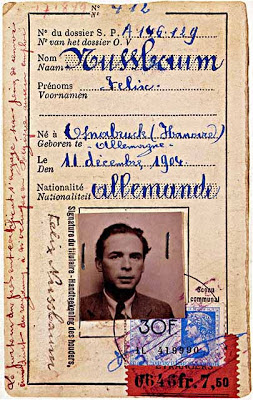 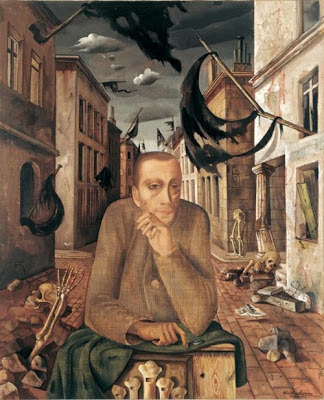 Nussbaum was born in Osnabrück, Hanover, as the son of Rahel and Philipp Nussbaum. Philipp was a World War I veteran and German patriot before the rise of the Nazis. He was an amateur painter when he was younger, but was forced to pursue other means of work for financial reasons. He therefore encouraged his son’s artwork passionately.

Nussbaum was a lifelong student, beginning his formal studies in 1920 in Hamburg and Berlin, and continuing as long as the contemporary political situation allowed him. In his earlier works, Nussbaum was heavily influenced by Vincent Van Gogh and Henri Rousseau and he eventually paid homage to Giorgio de Chirico and Carlo Carrà as well. Carl Hofer’s expressionist painting influenced Felix’s careful approach to color.

In 1933, Nussbaum was studying under a scholarship in Rome at the Berlin Academy of the Arts when the Nazis gained control of Germany. Adolf Hitler sent his Minister of Propaganda to Rome in April to explain to the artist elites how a Nazi artist was to develop, which entailed promoting heroism and the Aryan race. Nussbaum realised at this point that, as a Jew, he could not remain at the academy.

The next decade of Nussbaum's life was characterised by fear, which is reflected in his artwork. In 1934 he took Felka Platek, a painter whom he had met while studying in Berlin and would later marry during their exile in Brussels in 1937, to meet his parents in Switzerland. Felix's parents eventually grew homesick for Germany and, against his fierce objections, they returned. This was the last time Felix would see his mother and father — the source of his spiritual and financial support. Felix and Felka would spend the next ten years in exile, mostly in Belgium, a period of emotional and artistic isolation for him.

After Nazi Germany attacked Belgium in 1940, Nussbaum was arrested by Belgian police as a "hostile alien" German, and was subsequently taken to the Saint-Cyprien camp in France. The desperate circumstances in the camp influenced his pictures of that time. He eventually signed a request to the French camp authorities to be returned to Germany. On the train ride from Saint Cyprien to Germany, he managed to escape and rendezvous with Felka in Brussels, and they began a life in hiding. Without residency papers, Nussbaum had no way of earning an income, but friends provided him with shelter and art supplies so that he could continue his craft. The darkness of the next four years of his life can be seen in the expression of his artwork from that period.

1944 was the year in which the plans of Nazi Germany had the greatest impact on the Nussbaum family. Philipp and Rahel Nussbaum were killed at Auschwitz in February. In July, Nussbaum and his wife were found hiding in an attic by German armed forces. They were arrested, sent to the Mechelen transit camp and given the numbers XXVI/284 and XXVI/285. On August 2 they arrived at Auschwitz, and a week later Felix was murdered at the age of 39. On September 3, Nussbaum’s brother was sent to Auschwitz, and on September 6 his sister-in-law and niece were also murdered there. In December, his brother – the last of the family – died from exhaustion in the camp at Stutthof. Within one year, the entire Nussbaum family had been murdered.
Pubblicato da Il museo immaginario a 18:04